Joy and ebullience describe this closing concert of the 8th Classical Spree. On the programme: works by Vivaldi, composer of the universally famous Four Seasons. No instrument is left behind under Vivaldi’s pen: he gives them all their due in his innumerable concertos. All? Well, maybe not…but discover unheard-of versions of these works on unusual instruments! An array of fabulous artists unite to bring you right to the centre of the celebration!

Vivaldi, Sonate no. 5 for Cello in E minor, RV40 – Largo (with Octobass and continuo – without orchestra)

The octobass is generously loaned to the OSM by Canimex inc. (Drummondville).

Born in 1980 in Kishinev, Moldova, the talented Alexandru Sura started studying piano at the ‘V. Poleacov’ school of music. Two years later he entered the cimbalom class at Ciprian Porumbescu High School. Since the age of 12, Alexandru has consistently won the top prize in various national and international competitions. Since having embarked upon his solo career he has given many concerts and recitals in concert halls such as the National Philharmonic (Moldova), Place des Arts (Canada) and has toured extensively including appearances in Canada, USA, Romania, Austria, Russia, Germany, Belarus, Israel, France, Spain, Switzerland, Poland, Turkey and Mexico. In 2018, Alexandru played a series of concerts with the Canadian Opera Company in Toronto and had his own show as part of the OSM Classical Spree in Montreal.

Canadian violinist Timothy Chooi is regarded as one of Canada’s most promising and exciting young artists. Described as “the miracle” by Montreal’s La Presse, Chooi won a top medalist at the Michael Hill International Violin Competition in New Zealand. He won the Verbier Festival Academy’s Yves Paternot Award, the Academy’s highest honor bestowed on the most accomplished Verbier Academy musician, and most recently was awarded first prize in the 2018 Joseph Joachim Violin Competition Hanover. Timothy Chooi has performed with many renowned conductors including Pinchas Zukerman, Benjamin Zander, Carlos Miguel Prieto, and Yoav Talmi. He debuted with L'Orchestre symphonique de Montréal under the command of Maestro Jean-François Rivest and returned under the baton of Maestro Kent Nagano. He maintains a close relationship with CBC Radio-Canada, and his performances are regularly recorded and aired worldwide. Born in Victoria, British Columbia, Timothy Chooi graduated from the Curtis Institute of Music where he studied with Ida Kavafian. He previously studied with Pinchas Zukerman and Patinka Kopec. Timothy Chooi is currently pursuing his master’s degree at The Juilliard School in New York City.

Born in Taiwan, violist Lambert Chen gave his first recital at Montreal’s Chapelle historique du Bon Pasteur at 10 and first performed as a soloist with I Musici de Montréal at 13. A member of the Orchestre symphonique de Montréal for five years, he has been Co-Principal Viola with the Orchestre national du Capitole de Toulouse since 2014. Lambert has performed with various chamber music ensembles including the Schulich String Quartet, Musica Camerata Montreal and the Trio di Colore. He has appeared as a guest of the Montreal Chamber Music Festival, Orford Arts Centre and Music and Beyond (Ottawa). A recipient of McGill University’s Golden Violin Award and Sylva Gerber Music Foundation Award, Lambert is also a prize winner in the New England Conservatory Competition and the OSM Competition and placed in the finals at the Primose International Viola Competition. He holds the bachelor’s degree from the Peabody Institute of Johns Hopkins University, a Master’s from the New England Conservatory of Music, and a Doctorate from the Schulich School of Music of McGill University. He is currently Professor of Viola at the Institut Supérieur des Arts de Toulouse.

Flamboyant and energetic, Krystina Marcoux is rapidly gaining a reputation for her particular interest in interdisciplinary works. She dedicates her creativity in conceiving shows that combine musical excellence to other artistic disciplines. She strongly defends the idea that a stage is one malleable material that needs bending, curving and playing around, just like plasticine. Allying theater, dance, stand-up comedy, miming, humor or even sports to her percussion playing on stage, Krystina strives to open her musical world to a larger and broader audience. Winner of many prestigious prizes, such as the First Prize of the OSM Competition or the Fondation Banque Populaire de France, she has proven an extremely high musical and technical level. It is her unique artistic vision that brought festivals such as the “Biennale Musiques en Scène” or the Colombian Percussion Festival “FOSBO” to commission her shows. Originally from Quebec, she is pursuing doctoral studies under the guidance of Jean Geoffroy at the Conservatoire National Supérieur Musique et Danse de Lyon, specializing in the relationship between theatre and music. At the CNSMD and in partnership with the École Nationale Supérieure des Arts et Techniques du Théâtre, she has conceived and now teaches a program for musicians and actors, bringing both disciplines together so that they can learn from one another. 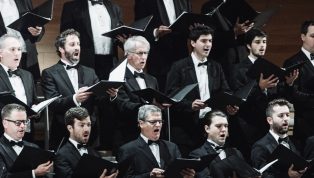