The OSM welcomes the Vancouver Symphony Orchestra’s Music Director Otto Tausk for a concert in which melody reign supreme. Berlioz’s Les Nuits d’été, a cycle of six mélodies (art songs) evoking love with tenderness, restlessness, mystery, and exhilaration, transports us to the lagoons of an unknown island. These pieces for solo voice are performed in turn by four of our most brilliant Canadian artists: Hélène Guilmette, Caroline Gélinas, Frédéric Antoun, and Geoffroy Salvas. Melody then flows from voice to orchestra, with one of Prokofiev’s last works, the Symphony no. 7, whose serenity and dynamism highlight each one of the OSM’s instrumental sections.

Sales are open until 10 p.m. on the last webcast day.

Dutch conductor Otto Tausk is the Music Director of the Vancouver Symphony Orchestra, Artistic Advisor at the VSO School of Music, and newly appointed Chief Conductor of the recently formed Phion Orkest van Gelderland & Overijssel.   Tausk has worked with all major orchestras and composers in Holland and a great many in Europe, North America, the UK and Australia. Until the spring of 2018, he was Music Director of the Opera Theatre and Tonhalle Sinfonieorchester St. Gallen. Operatic achievements at the helm of other prominent orchestras include performances of great works of the standard repertoire and world premieres (Upload by Michel van der Aa and Annas Maske by David Philip Hefti). He has an impressive catalogue of recordings to his credit, garnering among others Classica France’s Choc du mois and BBC Music Magazine’s Concerto Disc of the Month.   Otto Tausk studied violin and conducting with Jonas Aleksa. Between 2004 and 2006, he served as Assistant Conductor to Valery Gergiev with the Rotterdam Philharmonic Orchestra. In 2011 he won the City of Haarlem’s prestigious “De Olifant” prize for his contribution to the Arts in the Netherlands, particularly as Music Director of the Holland Symfonia from 2007 to 2012.

Acclaimed for her brilliant timbre, refined musicianship and remarkable stage presence, since 2004, Quebec soprano Hélène Guilmette leads a spectacular international career.   On the opera stage, she has appeared in Munich, Nice, Toronto, Lyon, Brussels, Montreal, Paris, Strasbourg, Amsterdam, and Tokyo, among other cities. She has performed in recital and in concert in Europe, South America, Asia, and Australia. She has sung under the direction of several highly acclaimed conductors and stage directors, and will soon perform at Covent Garden in London, with the Opéra de Montréal, in Paris, and in Seattle.   Her discography includes L’Heure rose, a collection of French art songs by women composers of the 19th and 20th centuries (Analekta), and Poulenc: The Complete Songs (ATMA). She can be seen on DVD as Sister Constance in Poulenc’s Dialogues des Carmélites, released by Bel-Air Direct. She is currently working on recordings of Fauré’s complete mélodies (ATMA) and Honegger/Ibert’s L’Aiglon, singing the role of Thérèse (Decca).   A graduate in Music Education and Piano from the Université Laval in Quebec City, Hélène Guilmette also studied with Marlena Malas in New York. She has been awarded grants from the Conseil des arts et des lettres du Québec, Canada Council for the Arts, and the Jacqueline Desmarais Foundation.

Born in the Abitibi-Témiscamingue region, Caroline Gélinas studied at the Conservatoire de musique de Montréal before becoming an artist-in-residence with the Atelier lyrique de l’Opéra de Montréal. She has sung with the Opéra de Montréal, Opéra de Québec, the Société d’Art lyrique du Royaume in Chicoutimi, the Highlands Opera Studio, the Canadian Vocal Arts Institute, the International Vocal Art Institute in New York and at the Centre for Opera Studies, in Italy.   Caroline Gélinas’s concert appearances include Rachmaninoff’s Vespers, Handel’s Messiah, Mozart’s Requiem and Bruckner’s Mass No. 3 in F minor. She has performed numerous recitals of French art songs and lieder. In 2018, she recorded her first album entitled Confidences on the ATMA Classique label with pianist Olivier Godin.   Named Radio-Canada’s Classical Breakthrough Artist (“Révélation Classique”) in 2017–2018, Caroline Gélinas was subsequently awarded First Prize at the Classica Festival’s International Competition of French Art Songs in 2019. Her solo concert Romanze with pianist Martin Dubé was nominated for an Opus Award in the “Concert of the Year—Quebec” category. She is the recipient of several bursaries and has been invited to sing in Germany and in France in 2021–2022.

A student of Gabrielle Lavigne and Aline Kutan, Geoffroy Salvas subsequently joined the Atelier Lyrique at the Opéra de Montreal as an artist-in-residence. He was awarded First Prize in the Operetta category at the 2017 Concours International de Chant de Marseille. In 2019, he was a New England Finalist of the Metropolitan Opera National Council and a laureate of the Classica Festival’s International Competition of French Art Songs.   For the Orchestre symphonique de Montréal’s 2018–2019 season-opening concert, he performed the role of Mantoo in the opera Chaakapesh by Matthew Ricketts. In 2019, he made his Opéra de Toulon debut in the role of Mathieu (Andrea Chénier). Geoffroy Salvas has sung in several major works of the repertoire for baritone, including operas, oratorios, cantatas, and lieder. His numerous collaborations over the years with the Orchestre Métropolitain, Opéra de Montréal, the Orchestre symphonique de Montréal and Opéra de Québec have enabled him to amass a robust stage experience.   His recent and future roles include Germont in a concert version of La Traviata at La Seine Musicale in Paris, and Soulayed in the premiere of L’Orangeraie (Zad Moultaka), a Chant Libre production. 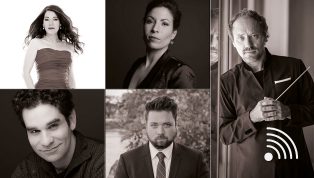