Beethoven was known in his time as an immensely talented pianist and improviser. A master of his instrument, he invested his piano sonatas and concertos with a rare creative genius, at once free, intimate, dramatic and magisterial. The Quebecois Charles-Richard Hamelin, shows the extent of his mastery of the repertoire in the Piano Concerto No. 4 and the Sonata for Violin and Piano No. 7 with the Canadian violinist James Ehnes.

Opt for our 3- or 5-concert package, and create your personal musical experience.

Bernard Labadie has established himself worldwide as one of the preeminent conductors of the Baroque and Classical repertoire, a reputation closely tied to his work with Les Violons du Roy (for which he served as Music Director from its inception until 2014) and La Chapelle de Québec. With these two ensembles he has regularly toured Canada, the US and Europe, in major venues and festivals such as Carnegie Hall, David Geffen Hall, Walt Disney Concert Hall, Kennedy Center, The Barbican, The Concertgebouw, and the Salzburg Festival, among others. He began a four-year term as Principal Conductor of the Orchestra of St. Luke’s in the 2018-19 season.

Charles Richard-Hamelin stands out on the international music scene as a “highly sensitive” pianist (Gramophone), driven by “a great depth of feeling without the slightest condescension” (Le Devoir). He is recognized as “fluent, multifaceted and tonally seductive… a technician of exceptional elegance and sophistication” (BBC Music Magazine).

Charles Richard-Hamelin has recorded five albums to this day, all published on the Analekta label. In 2015, he first recorded acclaimed performances of Chopin’s last works. Launched in 2016, his second album brings together works by Beethoven, Enescu and Chopin, recorded in concert at the Palais Montcalm in Québec City. His discography then was enriched by two more CDs, one devoted to the first part of a complete collection of Beethoven violin and piano sonatas, recorded with the solo violinist of the Orchestre symphonique de Montréal, Andrew Wan. His latest offering, devoted to Chopin’s two piano concertos, was recorded live in concert at Montréal’s Maison symphonique with the Orchestre symphonique de Montréal under the direction of Kent Nagano. His most recent collaboration with Les Violons du Roy leads to the publication of his latest album: Mozart’s Piano Concertos Nos 22 and 24, under the direction of Jonathan Cohen. These albums received awards and enthusiastic reviews from the leading music critics.

Gifted with stunning virtuosity, serene lyricism and unfaltering musicality, James Ehnes is a favourite guest of many of the world’s most respected conductors and celebrated orchestras. Among many others, has worked with the Boston, Chicago, London, NHK and Vienna symphony orchestras, the Los Angeles, New York, Munich and Czech philharmonic orchestras, and the Cleveland, Philadelphia, Philharmonia and DSO Berlin orchestras. In 2019–2020, Ehnes was Artist-in-Residence with the Dallas Symphony Orchestra. Alongside his concerto work, Ehnes maintains a busy recital schedule, performing regularly in the most famous international concert halls. In 2018, notably, he undertook a recital tour to the Far East, including performances in Hong Kong, Shanghai, Singapore, and Kuala Lumpur. Ehnes began violin studies at the age of five and made his orchestra debut with the Orchestre symphonique de Montréal at 13. He continued his studies at The Juilliard School, winning the Peter Mennin Prize for Outstanding Achievement and Leadership in Music upon graduating in 1997. He is a Fellow of the Royal Society of Canada and in 2010 was appointed a Member of the Order of Canada. He was the recipient of the 2017 Royal Philharmonic Society Award in the Instrumentalist category. James Ehnes plays the “Marsick” Stradivarius of 1715. 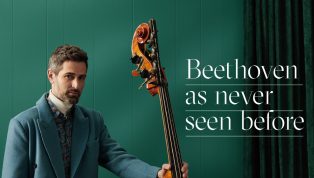 Opening Concert: Beethoven and the VoiceLIVESTREAM (sept 11) - INDOOR (sept 11) This first concert of the season offers a psychological drama of Beethovinian proportions. A symphonic poem before its time, the Coriolan overture gives way to the sublimes voices of Karina Gauvin and Marie-Nicole Lemieux in a whirlwind of tormented and impossible love.

Charles Richard-Hamelin performs Beethoven’s Piano Concerto No. 4LIVESTREAM (sept 15) - INDOOR (sept 12) Beethoven was known in his time as an immensely talented pianist and improviser. A master of his instrument, he invested his piano sonatas and concertos with a rare creative genius, at once free, intimate, dramatic and magisterial.

Poems of Love by Mozart and BeethovenLIVESTREAM (sept 22) - INDOOR (sept 12) The two works on this programme have particular resonance in the lives of their composers. While Mozart finished his “Haffner” Symphony only three days after his marriage to Constance Weber, Beethoven wrote his only Concerto for Violin shortly after his secret engagement to Therese Von Brunsvik.

* The OSM is making every effort to maintain its programming and is committed to abiding by health and sanitation regulations in effect as well as directives issued by Quebec Public Health. Please note that owing to uncertainties in connection with the COVID-19 pandemic, the repertoire, artists, pricing, and dates and times of concerts are subject to change without notice. In the event that the OSM is obliged to cancel or modify its programming, ticket-holders will be kept informed of any applicable terms and conditions relevant to the situation, which may include reallocation of unused tickets as donations, exchange, or refund.