Music has made the most extraordinary journeys across our blue planet through time and space. Every memory is a space shuttle for humankind’s greatest adventure: culture!

Thanks to traditional music, nations were able to express and invent themselves. Our traditions are the guardians and bearers of memories. Therefore, our gigantic common computer has the greatest random access memory!

Let’s further explore together some musical cultures from Quebec, West Africa and Latin America. We will also include a stop by the Symphony Orchestra’s own traditions.

COMPOSERS INSPIRED BY THE WORLD   |   LET’S PREPARE TO SING !

Folklore has had several names through history: originally known as simply “Music” by the first inhabitants, it was later called “Canadian Folklore” then “Quebecois Folklore.” Regardless of the given name, Folklore is our national music in some way. While originally referring to an old and often anonymous musical repertoire, folklore is now considered a fully fledged musical style. Traditional music is equally capable of making us dance or moving us: it is who we are.

“Trad” is an abbreviation of the word “Traditional.” Since“Trad” or “Trad music” is an easier way to talk about our living traditions rather than the full-length word, these terms are the most popular nowadays.

Although traditional music is often very old, « Ancient music » is mostly used to describe dated musical styles from the Middle Ages or the Baroque period, for example.

“Folklore,” which translates as “science of the people,” alludes to the past rather than the present. It encompasses a nation’s set of common knowledge such as song, music, dance, knitting or woodcarving.

Shortened from “folklore” (both in French and English), Folk depicts a large family of acoustic music with generally strong identity roots. This musical genre is often associated with social movements. For example, the 1975’s song featuring Greta Thunberg’s voice could be considered as part of a modern generation of folk music movements.

While this is how we call our current top hits, Trad music used to be THE popular music! But yeah, it was definitely a long time ago!

TRADITIONAL MUSIC AND DANCES FROM QUEBEC

Our traditions are the result of many crossbreeds and cultural exchanges. As a matter of fact, every culture developed and reinvented themselves through imitation while inspiring other cultural groups in return. Before becoming a performing art, Trad was based on oral traditions. Unlike writing systems, oral lores enable us to travel in our own memories through stories carried by word of mouth. Try to picture these songs as a Chinese phone game being played on a gigantic scale spanning across continents for several centuries. Traditional songs standing the test of time are thus deeply rooted in peoples’ lives.

Our traditional song was born of the encounter between the first nations and French settlers who will become the future Canadians, thus enriching their cultures thanks to their differences. Cultural exchanges with local peoples, who were identified by Europeans as “Indians,” were indeed very common back then. In this New France (1534-1763), we were singing to dance and travel by canoe or on foot. In addition, Irish and Scottish immigration led to one of the most important cultural mixing in Quebec.

Have you heard of these dances?

In Quebec, the four great traditional dances are the “set carré,” the “contradance”, the “quadrille” and the “cotillon”. Older dances, such as the minuet, date back to the Baroque period.

The “Podorythmie” might be the most significant landmark of our modern Trad music. While some British and French musical traditions incorporate feet-tapping, our way of using this technique as a real percussion section is unique to the Quebecois (and of our cousin French American communities).

Since dancers largely outnumbered musicians, feet-tapping became a way to keep the tempo, as old conductors of the court of France used to do with their sticks. In order to increase resonance, the musician was perched (“jouqué” in old French) on a chair which, in turn, was set on a kitchen table! Nevertheless, this practice was still less dangerous than composer Lully’s habit of hitting the floor with a big stick to keep his orchestra in rhythm. One day, he accidentally stuck the long conducting staff in his foot and died from his self-inflicted injury! Our present day’s tiny conducting baton is way safer…

THE "TRADITIONAL" INSTRUMENTS OF THE CONCERT

Although uncommon, this posture is still adopted by some contemporary baroque musicians. In some instances, violins will be tuned differently (“en vielle” or “en grondeuse” for example) to create new sounds.

A fiddler
by Jacques Luce

A violonist from the Orchestre symphonique de Montréal. By Luce T.G

One the griots’ favourite instruments, the Kora is considered by many as the harp of Africa. This string instrument is built with a fruit called the calabash and is mainly played in Western countries (Gambia, Senegal, Guinea-Bissau, Guinea-Conakry and Mali). Like the Quebecois tradition bearers and North European bards, griots are the keepers of ancestral lores.

They share and preserve traditions from fathers to sons through word of mouth since time immemorial. While travelling across generations of griots, these memories are constantly nurtured with new practices.

The Kora, an instrument from West Africa 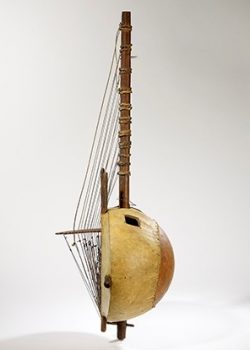 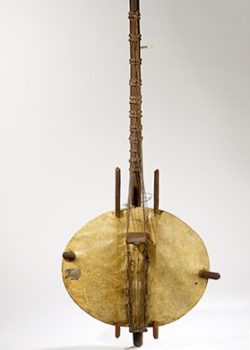 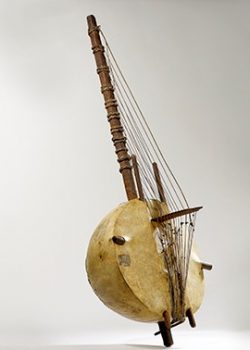 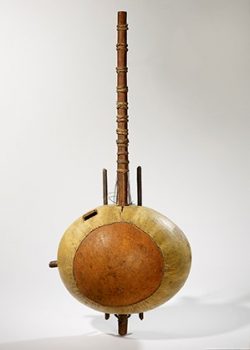 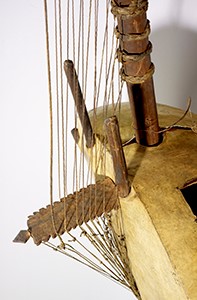 Flutes are particularly common in the Andean Cordillera, an imposing mountain chain which spans Bolivia, Peru, Ecuador, Chile and part of Argentina. In addition to the transverse flute, which is also used in symphony orchestras, we find zampoña flutes (from the famous family of Pan flutes) and the straight-shaped quenas.

Denis Bluteau (OSM) with his transverse flute by Felix Broede.

COMPOSERS INSPIRED BY THE WORLD!

Wars and holidays are key moments in historical musical journeys. The great medieval crusades brought Arab-Andalusian musical influences to France. These traces are still identifiable in French traditional music, especially in the playing of hurdy-gurdies and several French bagpipes.

Wars and holidays are key moments in historical musical journeys. The great medieval crusades brought Arab-Andalusian musical influences to France. These traces are still identifiable in French traditional music, especially in the playing of hurdy-gurdies and several French bagpipes.

Molière’s comedy Le Bourgeois Gentilhomme was inspired by the Turkish people of the Ottoman Empire. Later, the play will be set to music by the Sun King’s official musician: Jean-Baptiste Lully. Throughout this five-act « Comédie-Ballet », Lully emphasizes on singing and dancing by creating the danse baroque as we know it nowadays.

The 20th century’s world exhibitions made possible an encounter between the East and the West. Composers like Debussy seized this opportunity to discover the sounds of Indonesian gamelan from the isles of Bali or Java. The exploration of these musical worlds also inspired Ravel’s composition Laideronnette, Empress of the Pagodas.

Other composers chose to draw inspiration from the musical colours of their own country’s cultures. For instance, Frédéric Chopin wrote “Mazurkas” and “Polonaises” by celebrating the traditional folklore’s rhythms from his motherland Poland.

The five: Rimsky-Korsakov, Tchaikovsky, Rachmaninov, Prokofiev and Stravinsky, are all Russians whose creations were strongly influenced by their national music.

If we cross the Atlantic Ocean and head straight to Latin American, we will also meet such great composers! Astor Piazzola, a fervent defender of Argentinian tango, or even Arturo Marquez, from Mexico, were all inspired by their home countries’ folklore.

As always, composers from here and elsewhere will continue to inspire themselves with cultures from the world and their homeland.

> Discover the “Song across the world”

And now, it’s up to you to practice!